A note regarding mushrooms... 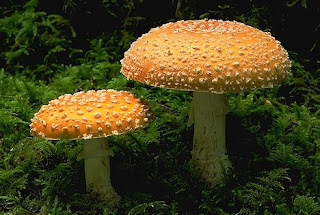 Tell people that you are eating wild mushrooms...and expect to have people afraid for your life!  Kind of like telling people you just bought a new motorcycle!  Few things strike fear into peoples hearts as much as wild mushroom eating.  While many cultures the world over have enjoyed mushrooms for eons...public opinion in the united states has generally turned against the practice.

So true!  That is why wild mushroom consumption is not for the careless.  Misidentify...and you could die...it could jack up your liver...or make you see strange new worlds...etc.  That is why proper identification is of paramount importance!

"But I've heard of experts that pick wrong and die!"...

I'm sure it has happened.  Even the "experts" can make mistakes.  Thankfully...those kind of mistakes are the ones that have added to our knowledge regarding what can and can't be eaten...and it gets put into the next book.

It is interesting to note that of the 1000's of mushrooms in the US...David Arora who wrote "Mushrooms Demystified" states that only 5 or 6 are the kind that will drop dead kill you.  Alexander Schwab who wrote "Mushrooming Without Fear" adds to that point by saying that those mushrooms all have gills.  This knowledge can help to curb the fear associated with wild mushroom consumption.

So why do "experts" die?  Well...more than likely because they venture off into consuming varieties that are not as easily recognized.  For example...eating the "Springtime Amanita" purported to be one of the most tasty mushrooms...which bears a striking resemblance to the "Destroying Angel" which is one of the the worlds most deadly mushrooms.

Now...can you tell the difference between an elephant and a zebra?  How about a carrot and a radish?  A  Golden Retriever and a Chihuahua?  While there are mushrooms that look very similar...many of the best ones to eat have...have easily recognizable features...that with some patience and education...one can comfortably harvest them and eat without fear.

So why go through the trouble to harvest wild mushrooms?

Here are a few reasons...

1.  Most people generally think of "mushrooms" as only the flavor of the button mushrooms they can get at the store.  In reality they come in all kinds of flavors!  As well as textures.  It is because of this that many of these mushrooms are served at the fancy expensive restaurants.

2.  It is fun to look for them.  It's like a treasure hunt that gets you out experiencing nature.  It gets you to slow down and really look.

3.  Wild mushrooms do actually have valuable nutritional value.  I had long believed otherwise until I read reports of varieties having more potassium than bananas...trace minerals...and other good stuff.  They also can have medicinal value.

If you are interested in getting into harvesting wild mushrooms I would suggest a few things.

1.  Check out a bunch of books from the library on the topic and learn.  If you find you are serious about it...you will want to have some of those books as a part of your collection to take with you to help ID the specimens you find.

2.  Approach it with complete caution!  Don't eat anything!  Just learn for a while.

3.  Go out with mycologists that can teach you!  Here is an event coming up in my neck of the woods that I will be attending.
Posted by Stephen and Lovell Nix at 8:37 PM