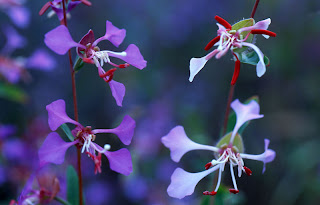 A showy flowering plant now covers the hillsides near my home in the Sacramento Valley in a blanket of pink.  The pink comes from the blossoms of Elegant Clarkia.Here is a great site that has photos and ID info.

I have heard it confused with Fireweed...and I can see how that would be as they are similar...and both come from the Onagraceae family and share similar characteristics.

A simple way to tell them apart is with the leaves.  Fireweed leaves have a vein that runs parallel with the margin of the leaf...while Elegant Clarkia veins extend to the margin.  Here is a fireweed leaf...

There are also obvious differences with the flowers...Clarkia has the 4 red stamens that stick out...and 4 that are less bright and are shorter.  Fireweed has what appears to me to be a lance shaped red calyx that sticks out almost like additional petals that Clarkia does not have.  The petals on the Clarkia seem to generally have a much more "paddle like" shape than the Fireweed does.

Here is a photo of Fireweed for comparison... 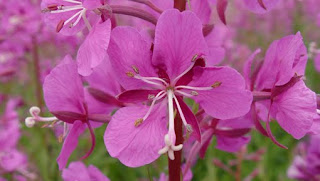 The Clarkia genus is pretty large...and has at least a few species that are similar in appearance to the unguiculata.  A perusal of some photos on Calflora should help you see which one you have.  It would appear that this species is the most widespread across the state...of those that look similar.

The scent is also quite intriguing to me.  To me it isn't a real "florally" scent...but seems like a scent of a plant from the desert.  Like a sagebrush or something.  I like it!


Miwok Material Culture: Indian Life of the Yosemite Region (1933) by S. A. Barrett and E. W. Gifford states that....

"Clarkia (Clarkia elegans Dougl.). Sokowila (C). The seeds were collected in a finely woven burden basket (tcikali, C) with the aid of a seed-beater. After drying they were parched and pulverized in a mortar. The meal was eaten dry with acorn mush. Sometimes the whole plant was dried and the seeds removed later. "

Moerman in "Native American Ethnobotany" records that the Miwok...

As they haven't gone to seed as of yet this season...I have yet to try this one out.  Perhaps soon I will have an acorn mush and Elegant Clarkia seed feast!
Posted by Stephen and Lovell Nix at 9:32 PM