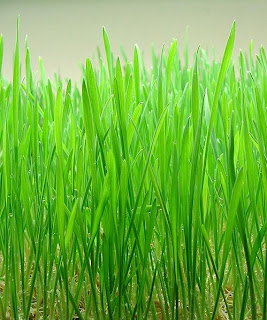 When spring has sprung where I live...one can step outside and hear the distant purr of lawmowers...and smell the scent of fresh cut grass.  Personally...I like that scent.  It fills my mind with fond memories of all of the fun things that happen in a season of warmer weather.  In all the years I have been smelling that scent though...never have I thought to myself..."I wish I could have a drink of that scent!"  While I still have yet to drink lawn clipping juice...I have had something that probably tastes a lot like it...wheatgrass.
Wheatgrass is just that.  Wheat that has been sprouted to the point that it resembles a lawn that needs to be mowed...and then it is clipped and juiced.  I have yet to meet a person who drinks wheatgrass because they love the flavor.  Most people drink it because it is super nutritious!!

The testimonials really are astounding.  People say that wheatgrass cured them of most every ailment out there.  I have no reason to doubt their testimonials.  I firmly believe that many of the ailments that we carry with us are directly linked to the nutritionally lacking...and even toxic food that we eat.  A blast of vitamin rich green drink could be just what is needed to revive the ill to health.

This knowledge has spread...and for some time now...health food stores sell small swatches of wheatgrass sod....and businesses like Jamba Juice offer small shots of wheatgrass juice...if you have the money to buy it at a premium.

People who don't want to pay the high cost...do it themselves.  I've grown it in the past with plastic growing trays...some run of the mill potting soil...and some wheat from storage.  There are lot's of places on online that will give you directions on how to do it.  It can be done simply...or you can buy into all of the other miscellaneous things that people want to sell you to make it better...like rock dusts...containers etc.  I do recommend that you do it in actual soil...as opposed to an artificial mat of nutrients like some people do.

After you have the wheatgrass...you need to get the juice out of it.  I own the healthy juicer...and have been pleased with it.  The only drawbacks that I can think of are the plastic construction...and the suction cup that keeps it to the counter.  I'd love to have one that is stainless steel and grabs the table.

If the day comes that you are living on food storage...and are unfamiliar with wild greens that you could eat...this could be a way to get some green in your diet.

And yes...the good ole' wheat from the cannery works just great.  White or red.  Just like with any seed...as time goes on...germination rates go down.  I have taken out old stored wheat and tried to sprout it without much success.  But you say "I heard that they got wheat to sprout from the mummies tombs in Egypt".  Even if you think that story is true...I wouldn't plan on your wheat sprouting if it has been stored for over 25 years in ideal conditions.  In fact...I would only attempt to sprout my newest wheat...and leave the non-sprouting old stuff for breadstuffs...because it is still good to eat...just not sprout.

NOW.  Having said all that...did you know that all grass is edible?  Not only is it edible...but it also has a high nutritional value (according to this book).  We don't have multiple stomachs like cows...and can't really handle all the fiber...but we can eat it in small amounts...or chew it to get the juices out...and then spit out the fibrous portion.  Or we could juice it! The reality is that I could actually be juicing my bluegrass lawn and enjoying some health benefits!  If you are going to juice grass from a wild or not so wild source...make sure that it is clean and hasn't been sprayed with anything detrimental to your health...and harvest the grass before it forms it's first node.  After that node (or knee) forms it is still edible...but more fibrous and less nutritious.  Harvesting wild grasses could save you the time...money...and effort of having to grow your own...with similar results.  I'm going to juice some grass from the yard tomorrow!!
---------------------------------------------------

I went into my backyard and used some scissors to snip some grass from an untrodden area.  I filled up a mixing bowl and then juiced it.  It was a deep green...and was much more pleasant tasting than wheatgrass has been.  My wife mixed in some apple juice...and it was quite tasty!

It also dawned on me how someone could have a source of water most anywhere...with a simple hand crank juicer and some clumps of grass!

I am unsure of the species of grass that I drank...as I am a grass identification rookie.  I am left to wonder how the nutrition of various grasses stack up against each other.  I wonder if that information has been published?!  I will continue to drink it knowing that it is generically "highly nutritious".
Posted by Stephen and Lovell Nix at 1:52 AM