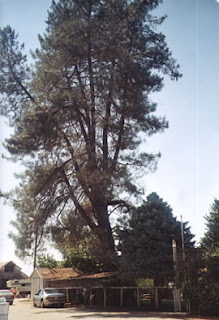 Yesterday...my eldest daughter and I parked at a car wash...and walked a short distance up a trail in a forested area of the city. On our way we saw Toyon berries...Black Sage...Black Alder...and a host of other wild edibles...but that wasn't what we were stopping for...we wanted some pine nuts.
If you didn't know...
Pine nuts are high in nutrition. They are not cheap to purchase at the store...so free is great! While they are well known for their inclusion in Pesto...it is also used in many other recipes (including salads, sauces, fish garnishment, puddings,cookies, cakes).
While all pine nuts are edible...not all pines have nuts worth collecting. In California...if you are wanting to harvest pine nuts...you are looking for the following trees....
Up the road in Tahoe one can find Pinus Lambertiana or "Sugar Pine". As a result of their presence there...many Tahoe sites are named "Sugar Pine" Point..."Sugar Pine" restaurant..."Sugar" Bowl...etc... They hold a couple of records in that they are the worlds largest pines...with the longest pine cones! The pine cones are so remarkable that people sometimes sell undamaged specimens at fairs for top dollar. While these do have edible nuts...they aren't widely harvested...as the tree is just too darned tall to take down the cones! One has to be content with what is leftover when they fall from the tree.
In my immediate region...the one that is everywhere...is Pinus Sabiniana...or "Gray Pine". This same tree is also known as "Digger Pine" (which may be viewed as politically incorrect)..."Ghost Pine"(because of how the gray green needles look ghostly)...or "Foothill Pine" because that is generally where it grows. Like three good friends hanging out...you will often find the Gray Pine with it's buddies "Blue Oak" (Quercus Douglasii) and "California Buckeye" (Aesculus Californica). Thankfully...all three of these friends have use as food for humans (when prepared properly).
A few identification points for the Gray Pine...
1. The needles are in fascicles (bundles) of 3...are droopy...and are 8-10 inches long.
2. The color of the needles is a pale gray/green.
3. They have a "pole" stage when they are young...but when they get older they branch out in forks and grow as tall as 160 feet! From a distance they are quite noticeable with their spindly dark trunks and sparce gray/green needles. See the photo above.
5. The cones are apple to pineapple in size and often have a lot of sap on them.
If you desire to learn which conifers are which in CA...HANDS DOWN the best book to get is "Conifers of California" (apt title!). The paintings are beautiful...the photos are crisp and clear...and the descriptions are thorough.
Other than for pine nuts...the pinus genus has many other uses. Here is a video with some tips on how to use pine trees and how to harvest pine nuts. One thing that I would add to what he said with regards to harvesting...is to not assume that because a cone has opened that all of the nuts have been released never to be found. I have found many opened cones on the ground still filled with nuts! In fact...we probably picked up $100 worth of pine nuts just off of pine cones we found on the ground in opened cones! Sometimes the pine cones would leave a nice...neat little pile of their nuts right where the cone had initially struck the ground. We also found many that had fallen from the tree...took to the wind...and were littered all over the ground. They can easily be found and eaten for free...if one doesn't mind a little bit of sap on one's hands...and taking a bit of effort to crack their little shells to expose the white nutmeat.
Posted by Stephen and Lovell Nix at 5:04 PM