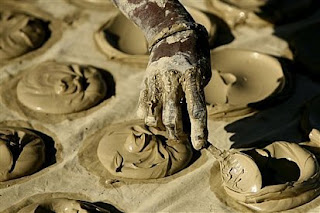 A child sits in a pile of mud...making "Mud Pies". Perhaps we might tell the child "They are only for make believe!"...hoping that they don't succumb to the temptation of sampling their culinary creation. Interestingly enough...there are some circumstances under which eating mud...or "geophagy"may make sense. The main circumstance...of course...will most likely be that you are starving!! ...but there are other reasons too.
In Haiti not too long ago "mud cookies" became the common fare of people unable to afford any other food. The reporter who tried the Haitian cookies didn't like it...but there are others who love the taste of clay.
Some American Indian tribes added clay to their acorn meal to bind the tannins so they could be consumed.
In the Southern United States back in the 1940's...eating dirt was a common practice that came over from Africa.
Some people eat it because they believe it has various healing effects...like as a cleanser of one's system. It has been used to detoxify after ingesting poison. It has also been used to relieve nausea.
Pregnant women the world over reportedly can feel compelled to sample the soil...and do. Some surmise that this may be due to a drive to have certain minerals to help with the babies development.
In their "Professional Guide Manual", George L. Herter and Jacques P. Herter wrote about the food value of mud...
"The silt or mud on the bottom of lakes, ponds, and sloughs that have or have had some vegetation in them has a high food value for humans. Such silt or mud contains the accumulated organic food riches of thousands of years both from plants, insects, and in some cases from such things as clams, fish, and crayfish. The best way to eat such silt or mud is to make a soup. It tastes surprisingly good. Laurel leaves, wild grape leaves, juniper berries, wild leeks, or dandelion will add to it's flavor.
If lost in the wilderness, mud soup alone will bring you through in fine shape.
This is a proven scientific fact, not my personal opinion. The world famous scientist Robert Beauchamp, director of the East African Fisheries Research Organization, made a great many scientific tests on the food value of mud and silt from the bottoms of lakes. He found, for example, that the mud from the bottom of famous Lake Victoria in Africa was especially rich in food for humans. He proved the point by feeding himself and his family on the mud and in all cases the individuals gained weight."
How would you have liked to be one of his children!!?
While there may be potential health benefits of mud eating...it is not something that I would recommend to people...except in a worst case scenario sort of situation. Most would probably have to be in that sort of situation to consider it anyways! It is reassuring to know that in the absence of plant life to forage...that if it came to it...you could eat mud...and that it could actually make you GAIN weight!!
Still...without a lab to test ALL of what is in the soil...you are taking a chance of consuming lead...or chemicals...or something else that is unhealthy or hard to digest. Also...eating foods with lots of grit can work like a sandpaper on your teeth. The CDC also has an article that discusses various health benefits and some sobering risks. This should hopefully dissuade casual mud eating...and make you want to become more informed about any soil you would want to consume.
I'd venture to say that to become a wise geophagist...one would need to become pretty good at recognizing soil types...have a good understanding of the nutritional values of the soils...and a really adventurous foraging spirit! If one get's good at it...perhaps they will make dirt brownies! Of course...a wise geophagist probably won't even practice his craft...and will save his/her knowledge for a time of real need!
Just one more arrow to put into our "worst case scenario food situation" quiver!!
Posted by Stephen and Lovell Nix at 9:45 PM